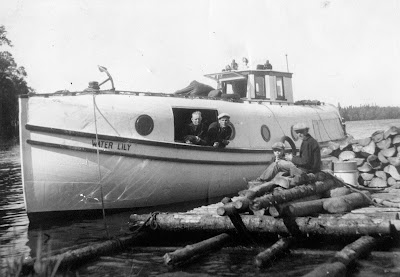 Here is a picture of the Water Lily, Kauppi's first ferry boat sailing between Copper Harbor and Isle Royale. He began his charter service in 1930 and it proved to be successful. Of course before that there were several ways to get to the island: from Houghton on boats or seaplane; by one or more passenger vessels which sailed around Lake Superior and other Great Lakes; and from Grand Portage, Minnesota, and probably Port Arthur on Thunder Bay, Canada. In fact, I once saw an ad for a round trip from Buffalo, Ohio, to Isle Royale for $29.00.

The picture you see here was taken after Kauppi sold the vessel to Ed Olson (he is the one with a cap on leaning out of the window). The others in the picture are my Uncle Jack Kilpela and his two sons, Lawrence and Howard. There may have been other owners after Olson but I am aware of only one, John Fallon, of Hancock, Michigan. My youngest son, Capt. John, is betrothed to John Fallon's youngest daughter, Stefanie. Before he passed away in 2006, Fallon told me that he was the last owner and after that the boat was demolished probably by burning it. He kept the sidelights for a souvenir.

Ed Olson told me that for a few years he ran fishing charters to Isle Royale with the Water Lily out of Eagle Harbor, it being an attractive spot to embark for the island because it was the nearest Michigan port to the island, only 48 statute miles. I suspect the picture was taken at Olson's dock in Eagle Harbor.
Posted by Capt. Donald Kilpela Sr. at 2:26 PM 2 comments: 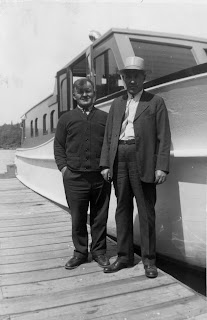 I mentioned Charlie Kauppi in the previous post. He was a Finnish Immigrant and commercial fisherman who fished and lived in the small community of Gay, Michigan. He also worked for a time in one of the copper mines in the area. In fact, Gay was a mill town and the remnants of that era, copper tailings, still fill what was once a magnificant, sweeping harbor; today it is a moonscape. In 1929, he took one of his fishing boats, the Water Lily, and converted it into a passenger boat and brought it to Copper Harbor to start running charters to Isle Royale which was about to be named a National park. Charlie was a short, stocky man (pictured here on the left) at the Rock Harbor dock on Isle Royale probably about 1940.

The first story I heard about Charlie, probably apocryphal, was that on a very stormy morning in about 1943 on Isle Royale with Lake Superior waves mounting between 14 and 18 feet, Charlie told his passengers that they would stay at the island until the lake subsided. Well, a Chicago man, who said he "had" to get back to Chicago, started begging Charlie to make the trip. Charlie was adamant. Finally, the Chicago man said, "Well, I didn't know that Finns had a yellow streak down their back."

Two or three others decided that if Charlie would go they would too so the small bunch departed Rock Harbor in the Copper Queen. It was not long before the Chicago man got pretty frightened. The old Copper Queen was plunging and diving in the enormous waves. After about an hour out lake conditions were worsening as they started getting the full force of the waves. After all, the reach on a southwesterly is about 275 miles or all the way from Duluth.

Finally the Chicago man started pleading with Charlie to go back; "I'm sorry," he said. Several times he struggled forward to the small pilot house and begged Charlie to return. Charlie kept going.

Finally, the man asked, "Are we going to make it?"

Charlie answered, "We go as far as we can."
Posted by Capt. Donald Kilpela Sr. at 4:37 PM No comments:

Part I: The Start 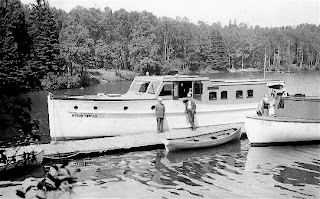 In 1945, as a young boy of 15, I was taken to Isle Royale with my father aboard the Copper Queen, pictured above berthed in Rock Harbor, Isle Royale National Park. The Copper Queen was owned and operated by Charles Kauppi. a commercial fisherman who wanted to expand his business to include ferrying people to Isle Royale which was about to become a national park.

I was part of a family outing consisting of my two sisters, my uncles Jack and Bill, and one or two of Jack's kids. Upon arriving at the Kauppi dock in Copper Harbor, we discovered that the boat was already filled to capacity. Speaking in Finnish, Kauppi's native tongue, my Uncle Jack pleaded with him; they were well acquainted because Jack lived in Calumet, a few miles south of Copper Harbor: Uncle Jack used every argument he could think of including, "we go the the same church," though I was to learn later that Kauppi didn't really go to any church, and "my brother drve 600 miles for this trip," an argument which we have heard many times after we owned the boat. Finally Kauppi relented and stuffed us aboard. Since then, though I have made hundreds of circumnavigations between Copper Harbor and Isle Royale (a trip of 56 miles), that one still sticks out as one of the roughest: we were half under water most of the time. Uncle Bill sat me down in the galley which was forward and a few steps lower than the weather deck and had me eat sandwiches and crackers to keep from getting seasick. I didn't get sick and as I learned later I don't have a propensity for the malady because I have never been seasick.

Here's a picture of Charlie Kauppi looking out from the Copper Queen. He was a great man, fearless almost to the point of reckless, and as hard a working man as one could find. Before he began his service to Isle Royale in 1930, he was a fisherman on Lake Superior. As time goes by I will relate some of the stories about Charlie. They are gems.

After that overnight trip in 1945, I waited for 43 years to take my own family to Isle Royale which we did in 1968 and every year thereafter until we bought the ferry service in 1971, we, none of us, ever looked back.
Posted by Capt. Donald Kilpela Sr. at 1:06 PM No comments: