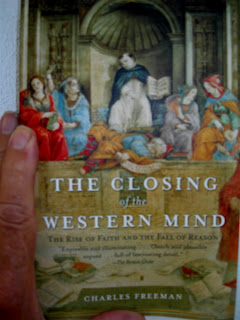 Well, our winter vacation is quickly drawing to a close. Next Sunday, April 1, we depart for Copper Harbor and the start of our 37th year owning and operating the Isle Royale Ferry Service from the Harbor to Isle Royale Narional Park.

I thought I would conclude my winter blog by posting the cover of the latest of three book I have read since arriving here in mid-February. The Closing of the Western Mind: The Rise of Faith and the Fall of Reason, is Charles Freeman's latest book on the founding and development of Christianity from Jesus to Thomas Aquinas with a fair amount of Greek philosopy (namely Plato and Aristotle) added. With a great deal of selectivity and not a little looseness, he adequately supports his premise as indicated in the sub-title of his book. Personally, I am wary of any writer on Christianity who glosses over the cataclysmic destruction of the Temple Mount in 70 ce and its impetus to Christianity and Freeman does just that. Moreover, in a patently untrue statement, he implies that all of Paul's letters were written before that event. This makes one suspect about the rest of the supporting evidence. Nonetheless, it is a good read and well worthwhile.

The other two books I read were Jerusalem: City of Three Faiths, (for the second time) by Karen Armstrong (another popularization of the history of that vital city), and Surpassing Wonder: The Invention of the Bible and the Talmuds (for the umteenth time), a book that stoked and continues to feed my interest in the history of religion (as opposed to the history of theology), by Donald K. Akenson.

Finally, I listened to the 14 lectures entitled, "Jerusalem: City of God, City of Fire," delivered by Professor F. E. Peters of New York Univerrsity, a series from the Portable Professor, whick is available at Amazon or B&N. It is a very interesting overview of the events that vexed people throughout its history and well into modern times.

In short, my free time between visiting friends, eating out a couple of times a day, walking about 3 miles per day, and shopping was spent doing what I love to do most: read.

As we start our season, I am on a critical path to retire on January 1, 2008 at the age of 77-1/2, just about the age my own father reached before he passed away and I guess that is the goal of most men: to live beyond their fathers. See you later.

Rosvopaisti at the Suomi Talo, Lake Worth, Florida 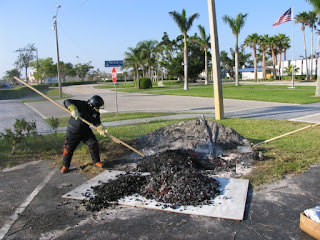 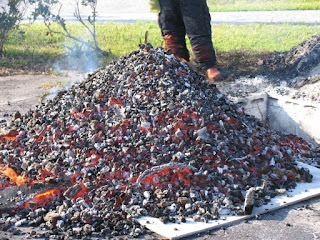 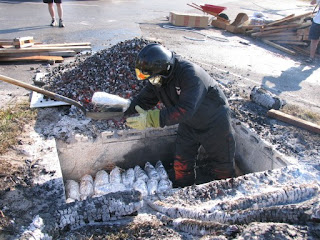 Here are three pictures of the roasting of the Lamb during the Rosvopaisti at the Suomi Talo (Finland House) in Lake Worth, Florida. Rosvopaisti is an annual celebration honoring the veterans if the Winter War of 1939-40 against the Soviet Union.

We met the man in the fireman's outfit at our apartment. He was flown here from Helsinki for a week to do the actual roasting. They expected hundreds of Finns to show up for the lamb dinner. Betty and I heard the term 5 o'clock so promptly at five we showed up ready for dinner only to discover that they started the roasting at 5:00 a.m. and that dinner was served at noon.

The roasting consists of digging a deep hole and lining it with rocks. Coals are then piled on the rocks and fired. When the coals are fiully consumed, the rocks are covered with more dirt and a layer of steel mesh on which the lamb (wrapped in foil) are placed. Mor cover of dirt are laid on the lanb and a huge pile of charcoal is put on top of that and lit. When that pile is consumed, the whole thing is uncovered and the lamb is ready to be served. The gentleman who is the expert also prepares the Rosvopaisti in Finland at which they serve upward of a thousand people. He told me that the whole thing gets very hot and requires a good fireman's outfit including a mask and breather.

These pictures are from the celebration in 2006. If you are interested in the Winter War, check out the five-part serise on Youtube. Just type in "www.youtube.com/watch?v=-G59ilVg6ZE&mode=related&search="
Posted by Capt. Donald Kilpela Sr. at 10:25 AM 2 comments: 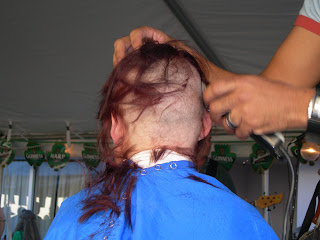 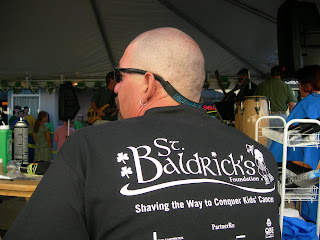 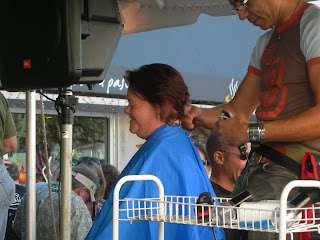 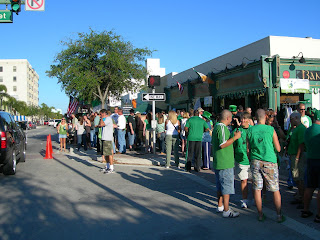 A wonderful tradition here in Lake Worth, Florida, is combining St. Patrrick's Day with St. Baldrick's Day which honors St. Baldrick by having your head shorn for a donation of at least $100 (usually supplied by your friends). Men, women, children all participate with five barbers donating their time and talents to sheer the volunteers. The money raised goes to "Kids With Cancer." The young lady in the first picture starts to look quite different in the last picture.

Brogues Irish Pub was the place to be in downtown Lake Worth today. Starting with a parade and ending sometime tomorrow morning, this place will be jumping. Though Betty and I have never observed what happens after about 10 p.m., we hear that things stay pretty calm (with the help of the Lake Worth PD of course).
Posted by Capt. Donald Kilpela Sr. at 3:32 PM No comments: 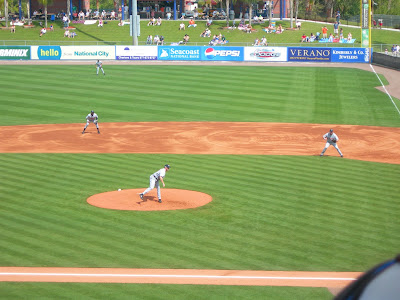 We are comfortably ensconced in Lake Worth, Florida, for the next few weeks. It is a nice respite from the severe weather that the Copper Country has been experiencing lately.

Granddaughter Miranda, who lives and works in Copper Harbor, reports that reservations for the 2007 season of the Isle Royale Queen IV are coming in steadily. Of course this news makes us very relieved.

Since the Tigers were playing their spring training opening game on Tradition Field in Port St. Lucie, we decided to drive up there and take in the game. Here is the opening pitch by a youngster who wants to make the regular team. Unfortunately, with the arms they already have on the roster, there is very little chance for that.

For the record, the Tigers beat the mets 5-4. Most of the big-name Tiger players such as Pudge, Sheffield, and Ordonez were left back in Lakeland but those that did make the trip--Granderson, Perez, Casey, Thames, among others--played hard and well. For this 77 year old Tiger fan, that was good to see.

I have an interesting series of articles planned about our experiences from 1981-1983 when we owned a small coastal oil tanker, the M/T MacVie, in Curacao. We operated there under a time-charter from Shell Oil to deliver gasoil, gasoline, and propane fuel tanks from the Shell refinery in Curacao to the island of Bonaire, both being in the Netherlands Antilles.

But that will have to wait until we get home to Copper Harbor. Meantime, check out www.copperharbor.blogspot.com for a blog about Copper Harbor posted by one of my sons, Capt. Ben Kilpela.
Posted by Capt. Donald Kilpela Sr. at 5:26 AM 1 comment: