An Affair With Gypsies 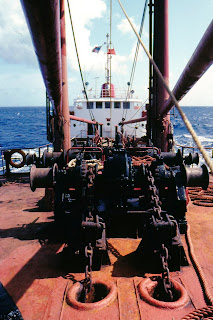 (The MacVie anchor windlass and chain. "Gypsies" are the lugs that grab the links of chain as the drum (wildcat) revolves.)


After receiving our charter and making several once-a-week round trips to Bonaire, our first serious problem arose. It occurred suddenly one fine morning after an evening during which Betty, daughter Susanne and her husband Jack, and I were at our rented house and clowning around celebrating the receipt of our charter money which we had in a bundle of US dollars. I remember laughing and singing the song from the musical, Evita," "When the Money Comes Rolling In…" and at one point throwing the wad of money up against the ceiling and watching in merriment as it floated down around up. Betty never approved of such antics but it was a way to relieve the pressure of the business, something we needed at times.

Well, as I was saying, the morning dawned hot and sunny as usual and, after a leisurely breakfast, I went to the MacVie where I knew that Lloyd's inspection F.J. Verloop was due to make another one of his interminable inspections. Unfortunately, he beat me there and had made his inspection and put a "NO SAIL" tag on the ship. Apparently, he had determined that one of the gypsies on the anchor windlass was worn down a bit too much. Gypsies are the lugs that grab the links of the chain as the windlass drum revolves when weighing the anchor. Each gypsy is about 3 inches wide, 1 inch thick, and sticks up about 2-3 inches and the windlass drum

(wildcat) has about ten of them.

(The "gypsies" are located aroung the wildcat pictured here.)

Verloop, who was still on the ship when I arrived, said I had two options: 1) replace the drum of the windlass, or 2) repair the gypsies by adding weld to them and grinding them to the correct size and shape. The first option was completely out of the question so I was left with the second: reluctantly I agreed to have the gypsies welded.

That simple decision led to many complex and expensive actions:

1. First, we had to wash all ten tanks, tanks that held over a quarter of a million gallons of oil, and certify them "gas free." This process involved hiring a crew of four men with masks and air tanks as well as hoses, washing equipment, and tank trucks with pumps to take out the wastewater. All told, it took two complete days around the clock. When we thought they were they were "clean," we called in the chemist who went into each tank with his Gas Detection Meter to test. He pronounced the MacVie, "Gas Free."

2. Inasmuch as we were now officially off-hire, all expenses in moving the ship accrued to us. A pilot was hired to move the ship to a "gas free" dock where the welding could be done. Upon arriving at the repair dock, Verloop came to inspect the operation and said that since the ship was now gas free, we would have to make some other repairs requiring welding. There was a long list but suffice to say the added repairs took longer than the original gypsy repair. 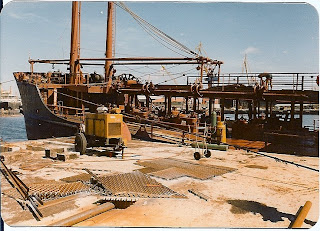 
3. Meanwhile the island of Bonaire, because of limited storage capacity and our inability to service them, ran short of gasoline and had to institute gas rationing. Moreover, they were desperate for propane and diesel fuel to fire their water desalinization plant.

5. After seven days, Verloop certified that the repairs were acceptable and we re-hired a pilot to bring the ship back to the refinery where she was loaded with fuel, a process that took a full 24-hour day. We were now 8 days off hire.

7. Finally, fully loaded, we sailed to Bonaire and arrived at about 10 p.m. on the 9th day off-hire. A workman from the local bakery immediately jumped on board to grab two 200-gallon propane tanks so that they can make bread in the morning. Meantime, we connected our discharge hoses to the manifolds of the gasoline station and begin all-night pumping.

Our load was not large enough to supply the pent-up demand however so we had to make an immediate trip back to Curaçao for more gasoline and diesel fuel after which the lines at the gas station ended and everything returned to normal.

But "normal" in Bonaire is a rarity. Within hours, the governor of the island thought, "what if this happens again?" His solution: he instructed his secretary to get a large barrel and have it filled with gasoline and stored in his garage for emergencies. The secretary subsequently decided that the governor knew something she didn't so she spread the word and then got some storage for herself and her family and soon the word was out like wildfire. Back came the lines of people with their containers of every size and shape and soon Bonaire was out of gas again. Away we went back to the refinery and another round trip.

Finally, things returned to normal and everyone was happy. What a great business 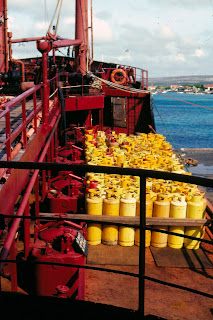 I was never able to unearth the reason Verloop was so down on us and going out of his way to find fault with everything. Moreover, it did no good to complain to the managing director of the Lloyds' office in Curaçao, Mr. Sleuter, because he was even worse. We would just have to find a way to live with it.

I had expressed my frustration to our agent and he suggested a subtle bribe, an expensive lunch perhaps or a small gift to Sleuter who, he said, was not averse to receiving a gift or two. In fact, he said that his office had delivered and "old, used" refrigerator to Sleuters's house one day, a gift of the Holland America Line, except (wink, wink) the "old" refrigerator was in a brand new crate. I did arrange to take Sleuter to lunch at the best restaurant in Curaçao but nothing came of it. I simply didn’t know the fine art of bribery.`
Posted by Capt. Donald Kilpela Sr. at 1:26 PM No comments: