The Tabloid Press and the Murder of Ethan Toney.

After Toney's murder, the tabloid press, Ultima Noticia Bonaire featured the murder on the front page, a story complete with a picture of Toney being taken off the ship in a stretcher and another of the knife used in the slaying. Unfortunately, the local tabloids are written in Papiamentu, a Spanish Creole language with a mixture of Portuguese and Dutch and spoken only on the islands of Aruba, Curacao, and Bonaire and I was never able to find someone who could translate it for me.

Nevertheless, I kept a copy of the newspaper in my files for many years. On a Caribbean cruise a few years ago, we stopped in Bonaire and I met a gentleman who remembered the MacVie and when I told him about the newspaper story, he offered to translate it for me. So when I got home, I faxed the story to him and shortly after he faxed back the translation.

Here is a copy of the actual front page of the tabloid. 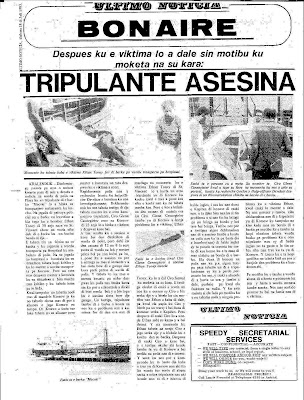 Caption under the picture on the left.

Ethan Toney being carried off the ship enroute to the hospital.


Caption under the picture on the right

This is the killer. His name is Ciro Glenn Cannegieter who covered his face after noticing us taking his picture. He is shown with Detective Goeloe and Assistant Prosecutor Davelaar.

Kralendijk – Sunday morning at about quarter past six the police were notified that a sailor from the "Macvie" had been dangerously injured with a knife by a fellow sailor. When the patrol unit arrived at the ship in question they found 30-year-old Ethan Toney from St. Vincent on the deck with a knife next to him. He had a knife wound in his abdomen and was urgently transported by ambulance to the hospital. [note: he was taken in the back of a pickup truck.]

At his arrival at the hospital, his condition was assessed as critical and he needed to be transported to Curaçao. But moments later his condition got even worse and the staff feared for his life.

It was considered unnecessary to transport him to Curaçao as he would not arrive in time to save his life. Dr. Kouwe tried everything in his powers but moments later had to declare him deceased.

Quickly the police and detectives, together with the Assistant Prosecutor Davelaar started their investigation. They overheard that a fellow sailor, 23-year-old Ciro Glenn Cannegieter from Curaçao had struck the victim with a knife and then run away.

As it turned out, the murderer ran into the direction of the police station but it is locked between midnight and 8.00 a.m. and one had to press the bell for the officer on duty to open up. The murdered did not know this so he waited under the garage behind the police station. It wasn't until 7.45 a.m. when after an extensive search the police that they returned to the police station and found him sitting there. [Note: How or when Ciro escaped and hid in the countryside for six days is not described but I doubt they ever actually found Ciro until he gave himself up six days later.]

A witness, also a sailor aboard the ship, told us that the whole problem started early in the morning hours when the Victim Ethan Toney cut another Curaçao sailor. He himself bandaged the would which wasn't very deep.

But the problem got worse when in the morning hours Ciro Glenn Cannegieter, a Curaçao native, got into an argument with the victim who hit him (Ciro) vary hard in the face. The eye-witness told us then that Ciro came to him and told him that Ethan had just hit him without any cause. The witness would have spoken to Ciro and told him not to worry and to tell the captain.

But after that Ciro waited for Ethan to go to bed. When Ethan was asleep Ciro would have cut him with the knife in his abdomen. After Ciro ran away the eye-witness who is also from Curaçao went to call the police. [Note: First, Ciro Glenn went on duty in the engine room for his 4-hour shift starting at 2 a.m. During his watch, he must have fumed over the slap which happened about 1.30 a.m. and as soon as his shift was over at 6 a.m. he went up and got the filet knife and did his act.]

As we understood it for quite some time the three Curaçao natives had to undergo all kinds of abuse from the rest of the crew who were from the English-speaking islands. When they would report this to the captain he would tell them that if there were problems on board not to fight on board, but on land.

He also overheard some claims by the murderer that he had to undergo all sorts of abuse because he was the smallest on the ship. For example, he told the police that some time ago one of the sailors on board lost his wallet and accused Ciro of stealing it. He hit him and he fell and broke his knee. It was that particular morning that he got fed up because he had no problem with Ethan and the latter had hit him without cause.

He (Ciro) looked to us like a peaceful person and this was confirmed by the other Curaçao sailors who did not want to stay on board anymore as they too were often targeted by the other English-speaking crew who disliked or hated them. It was not easy to get Ciro to become angry at the other sailors as he was such a peace-loving person.

This witness was also accused of stealing the wallet and consequently threatened.

Our deepest sympathy goes to the family of the victim.


It is interesting to me to see how the reporter turned the murder into a Curaçao vs the English-speaking islands and by the end of the story had Ciro, the murderer, a peace-loving person and Toney an abuser.

The "eye-witness" was our former cook, Sha Sha, who I had encountered later that day and he was afraid for his life though that evening until he had to go to the airport for a flight to Curaçao he attended a Raggae concert featuring the widow of Bob Marley, a concert attended by about 5,000 people (the island population was only 9,000). And, worse, he carried a knife under his pant leg and sheathed in his sock.

At best it was a frightful affair. Ciro spent a total of nine years in prison though with the sympathy expressed in this article probably got off early for good, "peaceful" behavior.
Posted by Capt. Donald Kilpela Sr. at 8:39 AM