Every year The island of Bonaire, where we brought our oil, featured the Bonaire International Sailing Regatta and Festival, a week of sailboat racing in the bay and around the island .

The sailboat racing was for the most part serious competition but accompanied by a festive air for partying and other fun activities associated in some small way with sailing. As in other events on the island, the festival was well attended not only by the locals but by people coming from other places. In short, it was an annual fun week.

Normally, the MacVie was not at Bonaire on weekends but occasionally, usually because of delays in off-loading product, she stayed until Monday. Such was the case during the Sailing regatta and festival in 1983. None of our family was on board during the stay, however, so our captain and crew were totally in charge, not an unusual situation inasmuch as the family regularly flew back and forth to Michigan.

The last day of the festival fell on a Sunday and all the sailing was finished.. In that sailing is not a spectator sport, no one minded that the MacVie was at the main dock at Kralendijk and for the most part blocking the view of the harbor. However, the last event of the festival on Sunday morning featured a motorized race in which anyone with a power boat—fishing boat, tug, speedboat, dinghy, anything driven by a motor—was eligible to enter. It was always a fun event with the various powerboats vying for position and roaring around Klein Bonaire, a little island in the bay. They raced a couple of times around the small island performing their crazy antics much to the delight of the spectators.

Unfortunately, the powerboat race started almost directly in front of the dock on which the MacVie was berthed thereby blocking the view of the race. Because of that, several people came up to the ship and asked if they could go aboard to watch the race from the MacVie's deck. Toney, who happened to be on deck watch, agreed to let a few aboard warning them that smoking was strictly forbidden on the ship.

Well, as many good intentions, it got a bit out of hand and soon there were about 125 men, women and children crammed on the ship's fo'c's'le, the forward most deck of the ship accessible from the weather deck only by a straight, 9-foot ladder. 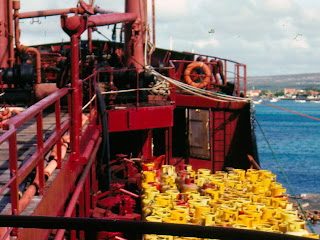 (Left: the ladder to the fo'c's'le is pictured to the right and just forward of the propane tanks.)


To his credit, Toney joined them on the fo'c's'le not only to watch for smokers, but to watch the race. In the aftermath Toney assured me that no one was smoking, ever.

To get on with the story, there they were, all 125 people and Toney among them waiting for the race's noisy and boisterous start. When all were lined up, the starter's gun was fired and maybe as many as 50 boats roared into action. Toney said it was deafening.

Unfortunately, the noise woke up Captain Zack who was asleep in his cabin behind the wheelhouse. He stumbled to the bridge wing to look out at what caused the noise and as he did he spotted the people on the fo'c's'le and he was stunned. Later, he told me that everyone was smoking and tossing their cigarettes around, a typical Zack exaggeration to defend his action.

Because he was about 100 feet away from the people, we had to yell at them. He yelled as loud as he could for people to get off the ship. Of course, in the din, he could not be heard distinctly so everyone just ignored him and continued watching the race. After a couple of more yells with no response, Zack went to his office and opened the safe and got the ship's loaded pistol. Back on the bridge wing, he tried yelling one more time but no real response. I suppose most thought that they had permission to be there and that was good enough for them. Besides, what was that man yelling? Bare-chested and hatless, the man certainly did not look like a captain so he was ignored.

Finally, Zack fired off a shot in the air. Even then, though he had their attention there wasn't much movement because they really didn’t know what he wanted or who he was. So basically there was interest but no response. 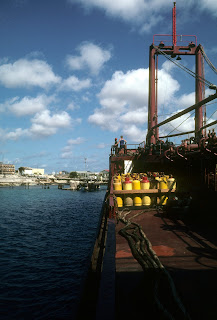 Now Zack lowered the pistol and let off a shot aimed a little over their heads. Whoa, that got some attention and a few people began to move about looking for a way to get off the ship with the only way being down a 9-foot straight ladder, not an easy egress by any stretch.


(Left: The fo'c's'le is well forward of the wheelhouse bridge.)


But they didn’t move fast enough for Zack so he lowered the pistol and aimed directly at the crowd. Now he had their full attention and away they went, scrambling down the ladder, jumping as well, and a few went over the side into the harbor. Toney said it was the fastest exodus of the ship that he could imagine.

Well, as one might expect, many of them went straight to the police station to report this assault and of course the police responded with a couple of officers and the chief to investigate.

They started to question Zack who, with his disdain for uniformed officials, simply brushed them off asking did they prefer to have the center city leveled by the explosion. With that, they quickly sided with Zack and agreed that he had done the right thing.

Nevertheless, when I heard the full account of the event, I was more determined than ever to give Zack his walking papers and I did a few weeks later when he was caught firing the pistol at a rat that jumped off the ship and was floundering in the water. It was an amicable parting and we have been in touch with Zack ever since and visited him once in his home in Victoria Island, B.V. and he once at our home in Copper Harbor.

Two years have passed, however, without a card or note so I suspect that he is either dead or totally infirm for all my attempts to locate him have gone unanswered. 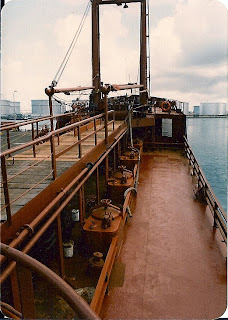 (The next day we sailed back to Curacao as though nothing had happened.)
Posted by Capt. Donald Kilpela Sr. at 9:40 AM

How did you manage to get people like that?

Why are ships always referred to as female?

For the most part, I inherited them with the ship. In two years, I probably hired no more than 3 or 4 crewmen and no officers. It's tough to get people from the Caribbean Basin and U.S. sailors are out of the question.

For the most part, these were good guys but of a different culture, something of which you must now be aware. That's just the way it is....

As to female ships, I suppose that goes back to English maritime law. I'll have to reference this. Go to ask.com and probably a thousand answers will come up. Basically, however, I would say "tradition."

That response to your comment was really mine. I have no idea why Logan's name came up.

Another bit of sailing trivia: I was watching the movie, "Master and Commander" and finally realized where the term "knot" (as is nautical miles per hour) comes from. Its the number of knots that pass by in a given period of time when a rope is cast overboard.