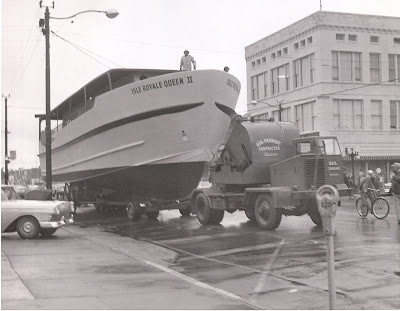 In 1955, after a successful career as a miner, commercial fisherman, and ferryboat owner and operator, Charlie Kauppi died. The Kauppi family sold the Copper Queen to the Sievertson family of Grand Portage, Minnesota, where she was re-christened Voyageur and put into service from Grand Portage to Isle Royale. The family also sold the Isle Royale Queen I to Capt. Ward Grosnick, a commercial fisherman out of Ripley, Michigan. Ward continued to sail the Queen I from Copper Harbor to Isle Royale from 1955 to 1959 when he had the T. D. Vinette Boat Company of Escanaba, Michigan, build the Isle Royale Queen II. The picture above is the Queen II being hauled down the main street of Escanaba on her way to the marina for launching. I am told by T.D. that the schoolchildren were excused so that they could watch her going by. When the Queen II was put into service, Ward sold the Queen I to a private party.

Ward and his sons ran the Queen II until May, 1971, when he sold both the boat and business to the Donald Kilpela family of Livonia, Michigan. Pictured below is the Isle Royale Queen II taken in 1975 as she lay aside the Rock Harbor dock on Isle Royale National Park. 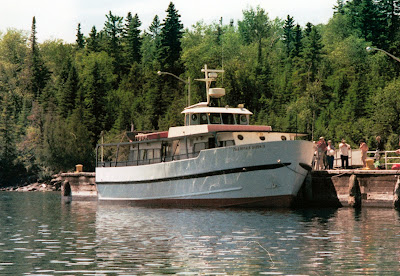 By the way, I don´t know the story of how you first heard about the Queen or why you were interested in buying it. That must have been a very interesting conversation with Aunt Betty.