Part I: Introducing the M/T MacVie 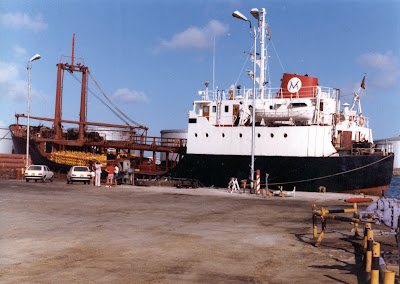 Welcome to a new series of blogs about the M/T (Motor Tanker) MacVie, a coastal oil tanker we owned and operated from November, 1981 through December, 1984. The MacVie was under time charter to the Shell Oil Refinery located on the island of Curaçao for the purpose of transporting gas oil (diesel fuel), gasoline, and 200-gallon propane tanks to the island of Bonaire, both in the Netherlands Antilles.

The MacVie was been built in 1959 by the Standard Oil Company of British Columbia and used there to move refined oil around the near coast and harbors. She was 170’ in length with a 33’ beam and had capacity for 211,232 Imperial gallons of cargo and 8000 of fresh water for drinking and bathing.

Accommodations: the top deck contained the captain’s quarters and office, a chart room, and the ship’s bridge. One deck down were the officer’s deck consisting of the chief engineer’s stateroom, five officer staterooms, a galley, the officer’s mess, and the crew’s mess. Down one more deck and we find the crew’s quarters, a cold storage room, and a small recreation room. The minimum number of men needed to operated the ship for an eight hour-hour shift was 6-7 including the captain, officers, oilers and deck hands. Finally, we go down to the engine room where the Werkspoor 825 hp, 8 cylinder diesel engine dominated; in addition there were two 250 hp diesel generators, one of which was running at all times.

None of the complement were US citizens; all, except my captain, a naturalized Canadian, were from the Caribbean basin countries.

It was an interesting time in the kilpela family, a time which we look back on with whimsy and sadness sprinkled liberally with nostalgia. But let me start at the beginning...
Posted by Capt. Donald Kilpela Sr. at 11:22 AM

Labels: Part I, The M/T MacVie