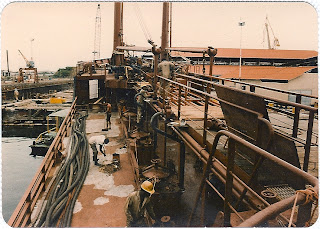 (When I finally arrived at the ship at the Curacao Drydock Company, I found the crew working on her.)

A Series of Shocks:

The trip from Hancock to Curacao to pick up the ship was one during which I was to discover what would define my experience as the owner of a ship sailing from a foreign port under a foreign flag: a series of shocks.

The first shock I was to receive was at the airport in Barbados. I had stopped there on my way to Curacao both to wrap up any loose ends with Capt. Vieweger and to assure myself and our finance company, as well as a future charterer, that the ship was fully covered. Before I left Hancock, I had purchased a pistol to bring to our captain who would not sail unless he had a weapon in the safe. When I arrived in Barbados, I ran quickly to the customs to beat the crowd. "Do you have anything to declare?" the customs official asked politely. "Nothing," I said. "Please open your suitcase." he said. I did and there to my horror was the pistol, right on top in full view. I was arrested immediately or more politely, detained for questioning, for over an hour after which, with the airport deserted of passengers and my pistol and passport confiscated, I was released with orders to appear at the magistrate's offoce the next morning for a hearing. Apparently I had convinced them that I was not a terrorist for they let me go into the night. I was shaken. 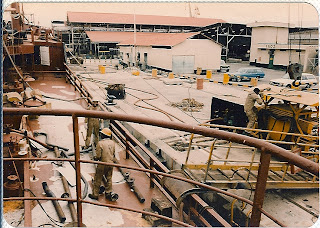 (Here's a picture of the ship lying at berth next to the Curacao Drydock Company, a berth for which we paid US$600 per day to use.)

After three horrendous days in Barbados during which I was assured that Lloyd's of London would maintain coverage on the ship, during which I was fined a hundred dollars and the loss of my pistol for trying to smuggle it into the country, and during which I learned that the ship had lost its charter at the Texaco refinery in Trinidad, I departed for Curacao shaken but undaunted for Vieweger had assured me that there was a charter awaiting us in Curacao with Shell Oil Company of Curacao.

Arriving in Curacao, I took a taxi to the Hilton Hotel where I slept fitfully.

I awoke early, excited and expectant, ate a hasty breakfast and went to the Curacao Drydock Company where the ship was berthed. There, I was to receive my second shock.

The Shell charter was tenuous. There was a competing bid by a local man who, though he didn't own a ship at present, was in the Netherlands looking for one. Furthermore, he was the son of the former Medical Director at Shell and certainly had the fast track. Moreover, told by the dockyard that the ship would cost $600 per day to berth and that, coupled with the fact that the crew of seven were now my responsibility to pay and feed, I knew something had to give. Well, when things are going badly, one had best do something even if its wrong. I went to the dockyard open bar where i got a smattering of good news: the dockyard gave me 24-hour use of a car, a small office with a secretary if I needed one, and unlimited use of the open bar at the office which was open from 4-6 each afternoon. In addition, I got daily garbage pickup and free fresh water. Just think, a place to berth and all the extras for just $600 a day. Our electricity was supplied by our own diesel genertators which ran constantly, night and day. I slept on the ship the first night as owner but was awakened often by the noise of the dockyard which operated around the clock.

On the seventh day as owner without charter, I was beginning to get pretty nervous. As the day came to a close, I was told that Shell had ordered both the Antillian Ship Inspector and Lloyd's Registery of Ships (unaffiliated with Lloyd's Insurance Company) to conduct final inspections which could lead to a charter. Fantastic! I slept like a baby and only awoke when the shift change whistle was sounded.

Unfortunately, on the eighth day, I was to receive one of the biggest shocks. Though I had "gold-plated" certificates of inspection from Lloyd's and from a private surveyor, the ship was condemned, first by the Antillian inspector and later the Lloyd's inspector. I was given a list of 150 violations that would have to be satisfactorily repaired or replaced before I could be allowed to sail. One of those violations, the venting system, was to cost over $35,000 to repair. And to my horror, the Antillian Ship Inspector was going to meet with Shell management in two days to give them the grim news.

Next Installment: We visit the ship inspector.
Posted by Capt. Donald Kilpela Sr. at 9:39 AM