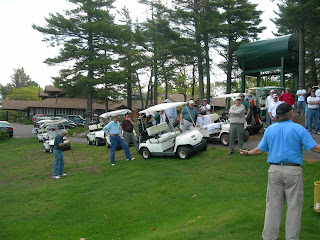 Held on the third Thursday in May each year, it is usually at the height of the infestation of black flies. For protection from the vicious gnats, golfers have worn duck tape around their ankles, head nets, full body nets, and doused themselves liberally with every imaginable bug spray only to find that the flies defy them and usually drive them nuts.

Golfers have tried putting a strip of "Bounce" hanging from the back of their caps, they've tried swallowing mega doses of vitamin B-12 or bathing with special "bug-repellant" soaps; some have tried not washing for several days before the tournament. Nothing really works. One simply endures.

The tournament is listed as a random draw (golfer's names are put into one of three boxes according to their level of skill), 18-hole scramble with a shotgun start. Just prior to the the start, names are drawn from the hat to make up 2-man teams. The catch is that a great golfer will get paired with a bad golfer, etc. In short, one would never get paired with someone of equal skill. In that manner, about 24 years ago I won the tournament having been paired with the late Professor Carmen DelaQuadri He had a bad right hip and I had a bad left leg; we won going away. 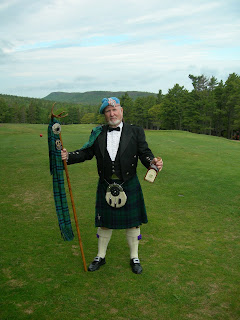 The opening ceremony usually features a piper leading the group to the first tee where Scotsman Don Keith, dressed in Keith Clan) dedicates the tounmant to the memory of St. Andrews Golf Course. This year he brought a bottle of Glen Keith scotch (distilled in Northern Scotland) with which to dab a bit behind each ear to keep the bugs away.

Following this, Capt Don has three golfers hit an opening demonstration drive: the oldest participant (this year, at 76 and 11 months, I was given the honor); the golfer who has been in the most tournaments; and usually one who will give everyone a good laugh when his drive flies in a gigantic slice over to the woods.

While the tournament is underway, Capt Don drives around the course filming everyone and usually harassing them enough to produce a prodigeous dub.

At the conclusion of the day, the golfers gather in the club house to accept the prize money and especially to see who gets the booby prizes (the main one traditionally a watermelon) for being the worst team of the day. Finally, Don plays the tape of the day on the VCR and a final good laugh is had by all.

I should mention that on the evening preceding the tournament, there is a 9-hole mini tournament whereby each hole is shortened to a 3-par distance. A number of golfers enjoy this as well and many stay the night at the Keweenaw Mountain Lodge.
Posted by Capt. Donald Kilpela Sr. at 10:57 AM

Great shot of the piper and it looks like the weather was nice. Thanks for keeping us posted. Miranda, your granddaughter, said that the bugs have been bad the past couple days with the arrival of warm weather on a steady south wind, which can really bring thme in and make them happy. But maybe the cooler trend did some good with the tiny fellas.