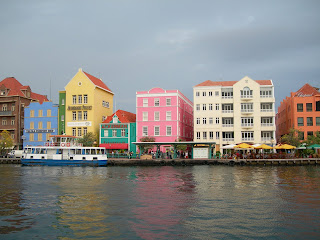 (Two pictures from the "Punda," a downtown area of Willemstad, Curacao. The first is the waterfront esplanade with the colorful buildings and the second is the main street. The city is divided by the "river" which leads to the bay and refineries. The other side of the "river" is called the Outrabunda and is populated by more Antillians than tourists while the Punda is the main more or less upscale shopping area. Twenty years later, we found that this was to change drastically with the outrabunda becoming the main tourist center and the Punda falling in a bit of decay.) 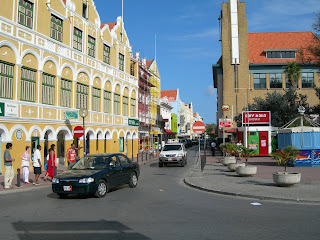 When deVries left the ship after his inspection, I was despondent. I had been told that a charter had been negotiated for me by Capt. Vieweger and that Shell and was waiting for the ship to be cleared the inspectors. In short, everything depended on the outcome of deVries' inspection.

The day slipping away. Betty was already in Chicago on her way and I didn't want to stand around and talk with Captain Zack (more on him in a later blog) so I left the ship ostensibly to do some shopping but in reality to go to deVries' office in the Government Building and ask for a private audience with him during which I would try to convince him that we were good people who had been wronged. Arriving at his reception area, I could see him in a glass-enclosed office a couple of rooms away. His secretary, a very friendly older Antillian woman, took my request to him and then returned to tell me he could not see me. What was I to do? It was one of those moments we have in our lives when all the alternatives seem hopeless. I couldn't leave; I couldn't stay. But I left the office and started down the hall, head down, defeated. I guess I looked pretty sad as I left the office because deVrties' secretary ran after me and stopped me. She said that Mr. DeVries gets to his office at 7 O’clock each morning and if I were to come down the hall and knock on his office door, which she pointed out to me, he would probably answer it and then it would be up to me. I thanked her profusely but wondered if any good could come out of such a bold strategy.

Later that evening, I went to a wonderful restaurant perched high about and overlooking Willemstad and the port. With a ice cold drink in my hand, I walked out on a perfectly safe catwalk to a viewing pod looking straight down to the reefs 200-feet below. I took one look down and I think I remember wondering if I could be suicidal and then decided not to test myself. Rather hastily I retreated to the safe environs inside the restaurant.

Betty arrived on the 11 p.m. flight and we both decided to confront deVries early the next morning. If we slept, it was fitfully.

Part VII: We confront Joop deVries in his office and later receive our Lloyd's inspection.
Posted by Capt. Donald Kilpela Sr. at 8:01 AM