Disclaimer: the events I have and will describe in this series of blogs about the MacVie occurred almost 26 years ago and my notes written at that time are abbreviated somewhat. For example, the two inspections and the visit with deVries took place over four days, not the three implied in the blog. I know that Betty could not make it to Curacao from Hancock in one day but would require at least two days, one to Chicago and another to Curacao. However that may be, I am not inclined to go back and find the problem with days, etc., so will just move on.

(below, the ship as it looked when we bought it.) 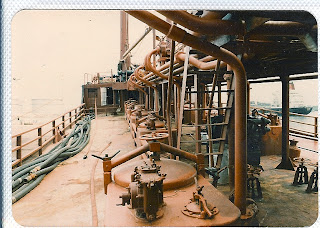 Since so many of our problems relate to our ship register, Lloyds, I think it would be interesting to know a bit about them. Every country involved with major shipping has its own ship registry. Shippers and insurance companies rely on these registries to assure them that ships which they hire and insure are not only safe but structurally and mechanically sound. Without an approved classification by a registry (the ship's flag will usually determine the ship registry), a ship owner would not be able to insure his ship or its contents and no shipper in his right mind would ship cargo on an unclassified ship. For more information on this subject, Google, “ship registries” and check out the various websites. Some major ship registries are American Bureau of Shipping (USA), Lloyds Register of Ships (British Commonwealth), Det Norske (Norrway), Gewrmanischer Lloyd (Germany), Cypress Bureau of Shipping (Greek), and Nippon Kaijai (Japan).

The M/T MacVie flew a Tortola flag and because Tortola is part of the British Commonwealth, we were registered and inspected by Lloyds Register of Ships. When I closed the sale on the M/T MacVie she held a classification of 100-A1, Lloyds highest rating. Accordingly, she was insured by Lloyds of London (no operating relationship to Lloyds Register) who was the lead insurer. That night as Betty and I tried to sleep, I kept wondering what went wrong. What could we have done differently? It was a question that plagued me for the next two years.

We arose early and left for the government building in downtown Willemstad. I remember being somewhat surprised that the Dutch Marine Guard standing outside let us pass with a question or glance, all the moreso because it was before normal office hours. We entered the building, went to the second floor and began the long walk down the darkened corridor leading to deVries office. Our footsteps echoed from the tile floor.

DeVries office window, which was opaque, revealed that the office was lit and occupied. With a final deep breath I knocked on the door and waited. I could see a shadow approaching the door—could my pounding heart be heard?—and then it opened. “Good Morning,” he said calmly. “Mr. DeVries, I would like you to meet my wife who just arrived from Michigan. We would like to talk about the MacVie.” After what seemed like a long pause, he opened the door wide and asked us to come in and have a seat at a round coffee table in the corner of his office. His next question was the most important and gratifying question I could have had” “May I get you some coffee?”

When I got the coffee, I determined to drink slowly for I was certain that he would not ask us to leave until I finished it. When, after a good hour, we finally left his office there was still a bit of cold coffee in that cup. It is strange to me now that so much importance rested on the speed which one drinks his coffee.

In essence, during our hour, we told deVries that we were good people, that we were duped by the previous owner, and most importantly that we would repair anything and everything that he determined to be faulty. As I said this, I was already wondering where we could get the funds. He was cordial and helpful throughout the meeting and at one point he excused himself to make a telephone call. He called his wife, Edith, and set up a dinner with the four of us at a Chinese restaurant. We did it!

When we left, we headed directly to the MacVie to await the Lloyds’ inspector, F.J. Verloop (rhymes with “hope”). 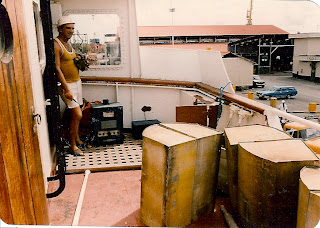 Just before Verloop arrived I looked over the Lloyds' Special Survey conducted a few months earlier in Trinidad and endorsed by him about a month ago. There were two minor problems relating to running lights and one other. When Verloop left the ship some three hours later, I was handed a list of 150 deficiencies, one of which I was to discover would cost about $40,000 to repair. My anger burst out in a tirade of yelling and stamping my feet and actually throwing the list to the deck. It was all too much.

(Above, Capt. Zack watches while they tear down the lifeboats to inspect its floatation and seaworthiness.)

Exhausted, I collapsed in my berth for an hour and then began to get estimates from the dockyard on the cost of the repairs. In the late afternoon, Betty and I drove downtown and sat in a small wharf-side café to drink coffee and watch the ships passing before us.

Later that evening we met Edith and Joop at the restaurant and spent a pleasant evening getting to know each other and our families, finding out in the process that they had two daughters one of which was the same age as our daughter, Lisa. No mention was made of the luncheon he was to have with Shell Oil Company the next day but I was confident I had allayed some of the criticism that he might have made had we not confronted him.

Having had two nights of little sleep, Betty and I snuggled on my berth, heads on opposite ends, and slept well. Good we did, for there were trying days ahead. 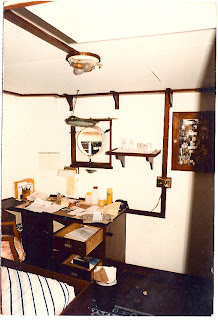 Next: Part VIII, Shell makes known its decision as to whether or not the MacVie will be chartered.
Posted by Capt. Donald Kilpela Sr. at 7:59 AM

Hello Everybody,
My name is Mrs Sharon Sim. I live in Singapore and i am a happy woman today? and i told my self that any lender that rescue my family from our poor situation, i will refer any person that is looking for loan to him, he gave me happiness to me and my family, i was in need of a loan of S$250,000.00 to start my life all over as i am a single mother with 3 kids I met this honest and GOD fearing man loan lender that help me with a loan of S$250,000.00 SG. Dollar, he is a GOD fearing man, if you are in need of loan and you will pay back the loan please contact him tell him that is Mrs Sharon, that refer you to him. contact Dr Purva Pius,via email:(urgentloan22@gmail.com) Thank you.