The MacVie Story, Part IX: Ready for My first trip. 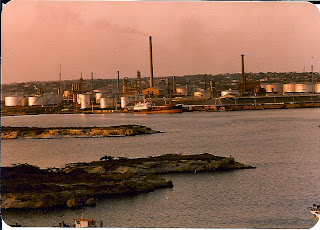 (A small part of the Shell Oil Company Refinery on Curaçao. Once one of the the world's largest refineries, it is now considered rather average.)
At 10:30 p.m. on the evening of November 25, 1981, I arrived at the Curaçao airport and after clearing customs was met by Capt. Zack who drove me to the ship. On the way, Zack said that she was fully loaded and ready to sail in the morning. It would be her 2nd trip to Bonaire and I was going to be aboard. I could hardly contain my glee at the thought of it. Also, it would also be my first sight of the MacVie at her berth in the Shell refinery. Zack had already got my pass so we entered the grounds of the refinery, a highly restricted area, without delay. Driving through a refinery at night, especially one of the world’s largest, is eerily disconcerting the first time. Danger lies everywhere: pipes emitting steam, methane vented and burned in great plumes of fire and smoke from tens of stacks throughout the grounds and everywhere what must be miles of pipes and hundreds of blue, red, and yellow lights, some blinking madly, others buried deep in the apparatus of the cracking plant and "DANGER" signs everywhere. Refinery odors are unique and almost overbearing. But as those who live downwind from a paper mill, one gets used to it.
After a winding long drive through the refinery we arrived at the ship. There she lay: the M/T MacVie, low in the water, filled with gasoline, diesel fuel and propane tanks, all ready to sail. I was awestruck. She looked glorius. When I boarded, I could feel the heaviness of the ship. Yet it was a feeling that she was alive, almost a springy spongy feeling. It was a feeling I grew to love.

After a short sleep, I awoke early. Unlike the dockyard where noise was constant and harsh, the refinery’s noises are hushed, humming, swishing, and the MacVie’s generators hummed and droned along with them. It was very soothing. The MacVie was berthed on her port (left) side and my stateroom was on the starboard side so when I looked out of my portlights, I saw only the harbor water shimmering from the lights of the refinery beyond the small bay we occupied. I looked out for a long time. It was also the windward side. Far in the distance was the high bridge which crossed the Sint Annabaai River which bisected the city of Willemstad. Soaring above the bridge at one end was Fort Nassau and the restaurant where a few week earlier I had stood in utter despair. Beyond that was the lights of Willemstad reflected into the sky against some low-lying clouds. And the wind! Prevailing easterly, it blew into my portlights constantly, a hot, dry wind. As I faced it, I had the sensation that I should feel cold; I didn’t and it was altogether pleasant. Into my berth I went and slept.

When I awoke, it was getting light and I could here noises about the ship, sounds that I couldn’t yet indentify. I dressed and walked back to the officer’s mess at the stern of the ship. A secured table surrounded by eight secured swivel chairs and a small refrigerator were in the room. The adjacent room was the galley where two crewmen were preparing breakfast for themselves. I asked them their names and position on the ship and was quickly told that they were not cooks. In fact, they said, we don’t have a cook at all and everyone just makes do for himself. After showing me where the coffee was, they departed to the crew’s mess which was on the other side of the deck. I poured myself a cup of coffee and walked out on the fantail to survey my surroundings. My whole body was electric; I couldn’t stand still and could barely drink my coffee.

Zack came down from the bridge deck where his stateroom was located and greeted me by telling me about several problems that we had faced when I was in Michigan, all of which took money to solve. But even that news couldn’t undo me. I just laughed it off. Told we were waiting for a pilot to guide us from the Harbor, I was taken aback. Simple as that, I thought, no ceremony; just get the pilot and leave. And then as if he deemed it, the pilot boat arrived and a young man dressed in a smart white shirt with captain’s bars and neatly pressed black trousers came aboard and headed directly to the bridge. I wanted a picture of the ship before we left and I asked if I had time to take a picture. With a long-suffering look at Capt. Zack, the pilot said okay and worked on his paperwork while I ran off the ship with my camera and looked for a vantage point. Being very low in the water, she didn’t look right taking the picture from the wharf so I ran around the end of the inlet and took a picture from across the way. Though hastily done, it turned out to be my favorite picture. Next, Part X: Sailing to Bonaire.
Posted by Capt. Donald Kilpela Sr. at 8:36 AM