Part XI: The Crew of the M/T MacVie 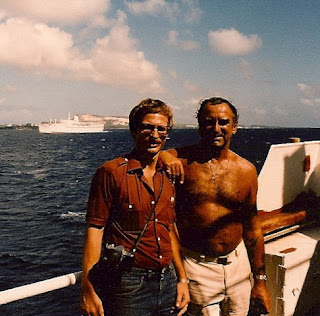 A period of over 15 months have passed since my previous post about the MacVie. One of the last things I wrote was that I would recall some vignettes about the crew and their antics. For some reason, I exhausted my motivation; perhaps it was my weariness or the memory of the episodes that got me down. Well, we are back in Florida for three months so I thought I would do my best to continue the epic.

The next few posts will introduce the crew of the MacVie; today's will focus on the captain and chief engineer

The men pictured are Jack Eberhard (at the time, Jack was my son-in-law who with his wife, Susanne, my daughter, spent significant time in Curacao assisting us in the daily operations and representing the MacVie in business matters) and my captain, Chris "Zach" Zahariaczewich, a former Polish citizen but now a Canadian naturalized citizen who carried enormous emotional baggage which he acquired during his youth in Poland.

Zach was born in the city of Auschwitz, Poland, in approximately 1930. His father was murdered by the Russians in the early stages of WWII as one of a mass murder of Poles who were fighting against the Russian army. After the murder, the men were bulldozed into a huge, common pit. When the Nazis drove the Russians out of Poland in 1939, they uncovered the grave site and, according to Zach, with great publicity the Nazis showed the international world how heartless and barbaric the Russians were. Soon after, Zach said the Nazis "rounded up my mother and me and we were put in a labor camp where we were abused and kept for the rest of the war." Baggage indeed.

Freed in 1945 but now under oppressive Russian rule, Zach worked diligently to get his seaman's license and after receiving it, got a job on a Polish steamship where he bided his time until the opportunity to escape Poland arose. It was on a trip to Amsterdam that the chance presented itself and he jumped ship and sought political asylum from the Dutch authorities. While awaiting adjudication of his case, the handsome young man spent his nights locked up in jail and his days in the "care" of the prison warden's beautiful wife ostensibly doing her errands.

In time, Zach's asylum was granted and thereafter he applied for and received a work permit as a seaman in the Canadian Coast Guard. He went to Victoria, Canada, to live and work and in time got his Canadian Merchant Marine Mate's Certificate.

Later, during the Vietnam War, Zach signed on as a First Mate on a U.S.- owned mercenary helicopter carrier that operated in the Gulf of Tonkin. One stipulation of the deal was that if he stayed aboard for two years he would receive American Citzenship as a reward. After 23 months, Zach decided he had enough and quit. The captain of the carrier tried to convince Zach to stay one more month for the citizenship but Zach was done and he signed off and returned to Victoria, Canada.

When he told me about this one day, I expressed amazement that he didn't want to wait another month for the citizenship but he just looked at me quizically and laughed: inscrutable and typical.

Eventually, back in Victoria, he was hired by Capt. Vieweger, the owner of the MacVie, as its captain and to operate her in the Eastern Caribbean under charter to Texaco Refinery out of Trinidad. He worked for Capt. Vieweger and our company until he retired. I remember the first time I met Zach.

Upon arriving at the MacVie for the first time to inspect her before buying her, Capt. Vieweger and I were met by Zach in the captain's quarters behind the pilot house. He was standing there in the gloom--we were experiencing a torential downpour which was uncharacteristic for Curacao--with nothing on but shorts and sandals and he was combing his chest hair. The first thing he said to me was, "You look like Richard Widmark."

After some chit chat, Vieweger instructed Zach to take me around to see the ship and meet the crew that were aboard. We started out in the engine room where we found the Chief Engineer, Edison Yarde, a Barbadian national, working on an engine. Speaking loudly over the noise of the generator, Zach introducted me to the chief as "Richard Widmark." The chief didn't smile and warily shook my hand and after a brief but awkward pause during which I tried unsuccessfuly to explain that the Richard Widmark thing was Zach's joke we left. I was to lean later that Zach and the Chief were never not on speaking terms unless it involved serious business matters.

We contnued the tour and whenever we came across a crewman, Zach invariably introduced me as Richard Widmark; he was enjoying his joke and the crew sensed that they were being fooled somehow and I was totally embarrassed. To say the least, Zach had a perverse and strange sense of humor. In time, I was to alternatively enjoy or be driven to madness by that humor. Unfortunately, if I bought the ship I would inherit the captain as well.

Zach worked for us for 24 months at which time we had to ask him to retired from the MacVie and he did. Since then, we have visited him in Victoria where his behaviors again drove me to distraction and reminded me of his previous antics and in Copper Harbor where he drove to see us and stayed in town for a day before heading back to Victoria. We exchanged cards every Easter (from him) and Christmas (from me) but nothing has passed between us for a couple of years now so I have been wondering if he is still alive. Someday I will try to locate his whereabouts.

The last time I saw him was in Florida where we were staying for the winter. He was was on his way with his girlfriend to take a cruise out of Ft. Lauderdale. We had a pleasant visit during which I asked him if, as a youth, he knew about the death camp on the outskirts of Auchswit 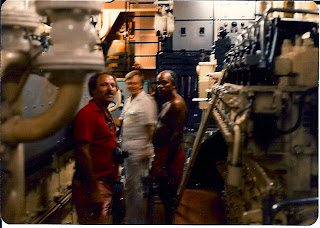 z. Shrugging his shoulders, he said, "Of course. You could smell the burning bodies."


(a picture taken of the Chief Engineer, Edison Yarde, in the engine room of the Macvie. The chief is on the right facing my friend and me on the left.)


Chief Yarde, as long as he worked on the ship, never left her to go anywhere except on the dock or quay to which it was berthed and once a month to the post office to send his pay home. He was a meticulous man who spoke so fast that the words tumbled out of his mouth one on top the other and that coupled with his Barbadian accent and a slight stutter made him almost incoherent. Invariably I had to ask "What?" every time he said something to me and that tended to slow him down. Though I often tried to start one, we never had a real conversation. In fact, I was so worried that he might quit the ship that I tended to coddle him and do his bidding which he soon realized would get him almost anything he needed. Without the chief, I soon realized that I was doomed.

As with all the crew, the chief was paid once a month in US dollars, cash, which he promptly mailed home to his wife in Barbados. Once I expressed concern about mailing cash through the antiquated Caribbean Basin postal system and suggested it might be better if I gave him a paycheck. Absolutely not, he said, adding that he had no faith in paper checks. As far as I know, he never lost a dime.

The chief kept to himself either in his engine room or his quarters and only occasionally came on deck and usually only then to inspect a repair of some equipment. When he was in the engine room, he always carried a wiping rag in his hand to clean up a spot or a drip. It was the engine room, spotless and organized, that sold me on the ship. Mistakenly, I thought the whole ship was in the same condition.

When we left the ship two years later, the chief was still aboard and preparing to work for the new owners.

Next post: Jim our pump man and Ethan Toney a deckhand.
Posted by Capt. Donald Kilpela Sr. at 1:22 PM