Part XI: The Crew of the MacVie (continued) 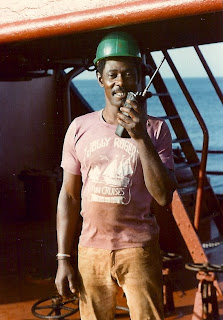 Jim, from Antigua, was our pump man. In that capacity, he supervised the on- and off-loading of gasoline and gas oil of which we carried a total of about 4,500 Canadian barrels or 180,000 gallons. Typically, to protect his own value to the company, he would not share his skills with other crew and quite frankly I didn't know how to operate the pumping system either and was, therefore, at his mercy. Being a deckhand as well, when he wasn't pumping, he chipped and painted as the rest of the deckhands, a chore I knew only too well.

(Here's Jim smiling and posing for a picture.)

Capt. Zach said that Jim had several wives scattered around the Caribbean (probably a Zach overstatement) but I do know that he would send parts of his pay to difference destinations and as the Chief, he always sent cash.

When he was off duty, he worked out in a makeshift gym under the fo'c's'le, which is at the forward end of the ship near the bow and he had the body to prove it. 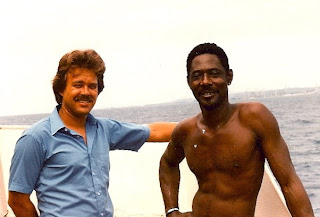 Though diffident most of the time, when provoked, he could throw a withering look that kept his adversaries at bay. As on many ships like this, the gulf of friendship between the deckhands and oilers was very tenuous: arguments and fights, usually very short, could break out at any point for a myriad of reasons but most centered around perceived insults. Moreover, since there were no locks on their cabins and the door always open, thievery was always suspected which led to many an altercation. Moreover, there was a natural dislike between oilers (engine room crew) and deckhands. 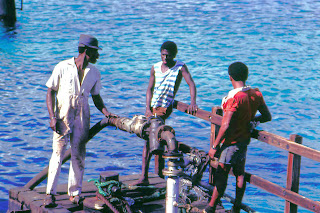 (Pumpman Jim at the offloading manifold in Bonaire.)

Before taking over the ship, I had stopped in Barbados to sign some insurance papers. I was already a little apprehensive about the crew situation, i.e. would I be able to cross the cultural divide between us to effectively manage them. Having completed my business, we had dinner with Capt. Vieweger, the former owner, and his wife, Madalyn. Vieweger was an inveterate story teller and spent the evening reminiscing about his ownership of the MacVie. We were starting to get pretty tired and a little sleepy when he told a story about the ship that woke me up and gave me pause to think what we were about take over. Let me try to recall the exact story as told to us by Capt. Vieweger: "We were sailing down the Pacific from Vancouver to the Panama Canal and bringing the ship over to Curacao, eh? [Viewegere was a Canadian, eh] Well, one night they knocked on my cabin door screaming that two crewmen were at each other with knives. Well, I grabbed a piece of green heart lumber four feet long and an inch on the sides -- you know it's the densest wood there is. It doesn't float." He went on, "Well, I keep that stick in my cabin for just this sort of thing. I took that stick down to the galley where they was facing each other down, eh, and I slammed that stick on the table with a WHAP and I said, 'DROP THOSE KNIVES!,' and they damn well did too? You know," he paused for effect, "they can smell fear." After that story I couldn't wait to get on that ship.
Next, Ethan Toney, the deckhand who was murdered on the ship.