Just Another Ho-Hum Day in Paradise 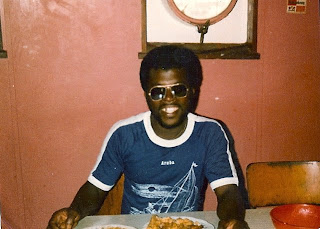 Ethan Toney, a deckhand, was originally from St. Vincent but when I owned the ship his mother lived in Curacao in a tiny cottage on the outskirts of Willemstad. Several relatives also lived nearby or boarded in the house; I was never sure.

Toney, as we all called him, had a winning smile and a mellifluous voice with a nice Caribbean lilt. He also had a mean streak.

He was the closest to our family and took many pictures of us to put on the wall of his bedroom, a practice unbeknownst to me until I had to visit Toney's family home after he was murdered.

We had owned the ship for a year and a half and were thinking seriously about how to extract ourselves from the business when one Saturday night upon returning to the ship after a late dinner I heard a good deal of partying in the crews quarters. The porthole of Toney's cabin was at my eye level as I walked past the ship and someone inside spotted me. Toney stuck his head out of the open porthole and asked me to come in a have a drink. No way, I said, and warned them about making so much noise lest they wake up the Chief who would go nuts. The last thing I said was. "pack in it you guys and get some sleep."

I was asleep on Sunday morning when I awoke with a start. It was an unrecognizable yell from outside my forward porthole. I got up and looked out and I could see Toney leaning against the rail and waving his fist at someone. I went to the side porthole to see who he was waving at and saw one of my crew half running down the pier toward the town. Returning the he other porthole I looked again and Toney was gone. I remember thinking that they most likely were chasing an intruder off the ship. So I went back to sleep; but for a moment only. Something made me get up again and look out the porthole. Still no Toney. I then craned my neck and looked straight down from the porthole and there lying akimbo on the deck with a knife in his hand was Toney. 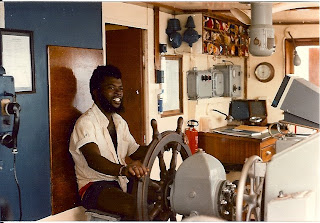 In a daze -- more like shock -- I pulled on a pair of shorts and my flip flops and ran up a flight to the navigation room behind the wheelhouse where the first aid station was located. Unfortunately, everything in the cabinet was in Dutch so I had to rip open box after box after box to find a compress.

Sweating profusely, confused, terrified I guess, a practically jumped down the three flights of stairs to the weather deck where Toney was lying with some white stuff oozing out of a small wound in his stomach. There was no blood. I pressed the compress on the wound and as I wondered what to do next, pumpman Jim came out on deck. I ordered him to hold the compress on the wound while I went to get an ambulance. Away I ran down the pier toward the police station a few blocks away. Arriving, I discovered that the doors were locked and nobody around. My mind was racing. A hospital! I remembered a large building that looked like a hospital on the other side of the city several blocks away. Irritated with myself, I thought, why hadn't I been more observant. 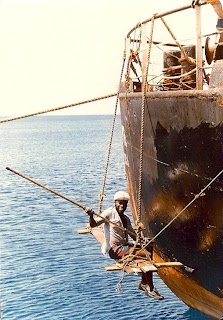 I ran through alleys and streets in my shorts and flip flops and got lost in the maze of alleys until finally reached the street where I had seen the building and there it was, very institutional looking. I ran inside, panic on my face I suppose, and saw several people milling around in the halls. "Doctor!" I shouted. "Where is the doctor?" One woman uttered a benign "Bon Dia," and another one just looked at me blankly and smiled. Most just ignored me. Suddenly it hit me: this was an old folks home; these people were senile. I was near collapse with heat and panic when I saw in the distance a woman in a white outfit outside in the back courtyard. I ran out there and asked her for the doctor and she indicated that there was a clinic in a small building in the rear. I ran to the clinic arriving just as the doctor was getting up and stretching and also just as a pickup truck roared up to the emergency entrance with several people on board and Toney on a stretcher.

We grabbed the stretcher and quickly got him into the operating room and shut the door and I went to the waiting room. I could see Zach standing outside next to the truck talking to reporters from the local press who were arriving quickly and I remember wondering what he would be telling them. I wished at that time that I had gotten rid of him sooner. What next? I thought

What was next was the doctor coming out to the waiting room and in a matter of fact voice announcing that Toney was done for. I suggested that we could fly him to Curacao if needed to be operated on there but the doctor said he was dead, finished, that he bled to death internally.

I was stunned. What should I do? The doctor assured me there was nothing I could do. And after a moment's hesitation, he returned to the operating room and I was left alone in the waiting room. So I left and as I walked past Zach and the reporters, I told him that I wanted walk back to the ship by myself to clear my head and I left the clinic. It was not yet 8 a.m. on a beautiful Sunday morning. Cars were starting to fill the streets. People were walking past dressed in their Sunday clothes heading for Mass. I had just had a murder on the ship.
Sitting on a park bench I realized that I had to gather up what was left of my strength and to do my best to deal with this ugly mess.

The rest of the day was lost in a fog: there was the police search of the ship; the cars and trucks full of police and militia tearing around town looking for the killer there rifles on the ready (doubtful they had ammunition in them) and waving to people they knew as though it was a festival parade. Meanwhile, back at the ship I had the rest of my crew to deal with. 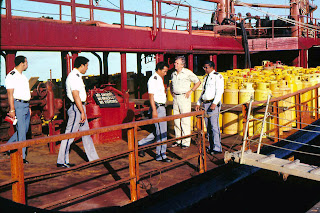 (Bonaire police depart after searching the ship for Glen)

At one point, Sha Sha, our former cook, came to me and said he was frightened and that they were out to get him too. He said that he had given one of the oilers, who was going home on holiday in Dominica, his handkerchief and his picture and that the oiler showed it to a shaman and the Shaman said that he, Sha Sha, did not steal any money. Now understand that Sha Sha was a Catholic so I said , "Sha Sha, surely you don't believe in shamans do you?" His response surprised me: "Yeah mon, they know." But what worried Sha Sha on this day was that Peter had left the ship for good and could not testify as to his innocence to the rest of the crew. And he asked me to get him back home to Curacao and to protect him.

So that was it. Stolen money. Apparently, during the party, it got a little ugly with accusations floating around the cabin when in a rage, Toney slapped one of the oilers and accidentally scratched him on the chest. The oiler was due to go on watch so he left and went down to the engine room where he sat, half drunk, and probably seething with anger. At about 7 a.m. as soon as he was relieved from watch he went to the galley and took a filet knife and then went to Toney's cabin where he found him fast asleep on his bunk. He plunged the knife into Toney's stomach and that was that. If Toney had not pulled the knife out, he might have been saved.

In any case, Sha Sha asked for protection and to be returned to Curacao where his family lived so I brought him to the police station and asked the guard if he could stay there until the plane departed at 10 p.m. that evening. They agreed and I bid Sha Sha good bye and went to my agent's office to make arrangements to get him home. Then, to clear my head, I went for a long walk into the countryside along the coast.

The aftermath: The murderer, from Curacao, was Glen, an oiler on the ship. It took six days in desert-like conditions (Bonaire is semi-arid) amid the cactus and sand without water before he stumbled into town and gave himself up. For his sentence, he received six years in prison. Unfortunately for him he escaped again after the sentencing and this time spent only three days in the wild before giving up, an act that got him three more years in prison.

We paid for Toney's magnificent funeral in Curacao and everything resumed as normal. Easy.


(Left to right) Toney, deckhand Elvis Jack, daughter Susanne, Sha Sha, and son Don displaying a Marlin they caught on the way to Bonaire one day) 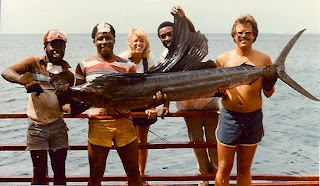